This set of three silk paintings, introduced in my previous post, was created as a tribute to the seven Pacific Voyager vaka or double hulled sailing canoes, which have just completed an epic journey across the Pacific Ocean. 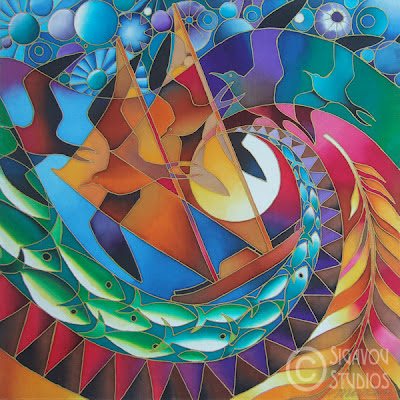 "Journey of the Vaka III"

The vaka project has seen indigenous people from island nations across the Pacific collaborate to revive traditional navigation methods, while spawning new interest in the preservation of cultural practices and respect for our ocean environment.   Using the power of wind and sun to sail through the Pacific archipelagos and across to North America and back, our vaka sailing crews have become local heroes – bringing marine conservation, and pride in traditional customs, into the headlines of our mainstream media, and into the conversations of island people across all generational and cultural divides.

“Journey of the Vaka” features key navigational methods used by our voyaging ancestors – and by the vaka crews of today:  Charting the stars, observing the positions of sun and moon, noting the direction of prevailing winds, currents, and swells...  Watching for significant cloud formations, reading clues in the presence of plant debris floating by, observing the flight paths of birds and migration patterns of ocean wildlife, while drawing on the vast knowledge and guidance of sea-faring elders; all this coupled with the self-reliance and survival skills still found in many of Fiji’s outer islands were the forerunners of modern day GPS in the Pacific...

A humpback whale with calf swim through the middle painting—the patterns created by spectrographs of their haunting songs forming part of my design.  The effect that the increasing noise pollution in our oceans has on whales and other wildlife was one of the issues highlighted in the Pacific Voyagers environmental campaign.

And what of the small family in “Journey of the Vaka I”? Will they be torn apart by the call of the ocean?  What will the future hold for the child of the Pacific, nestled in the arms of a mother who tries instinctively to shield it from the winds of change blowing through all our lives....

Spread across the three paintings are the forms of seven vaka, their twin, triangular sails filled with wind.  Six of the canoes, each representing a specific island nation, have rust-coloured sails, while the sails of the seventh vessel, with its international, pan-Pacific crew, are white.  By portraying the forces of nature with dynamic movement of shape and line, I have tried to reflect both the vulnerability of the vaka, and their sense of purpose as they spread their uniquely Pacific message of ocean conservation to the rest of the world.