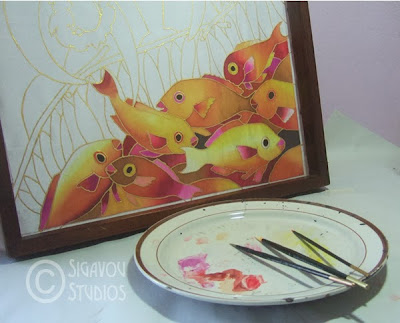 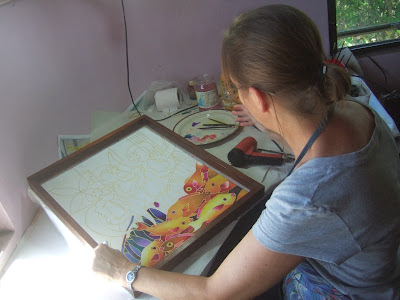 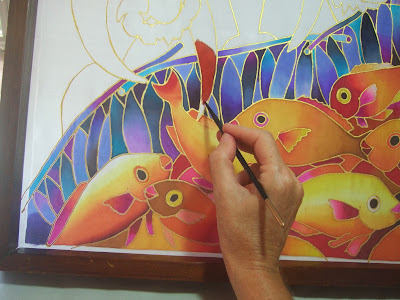 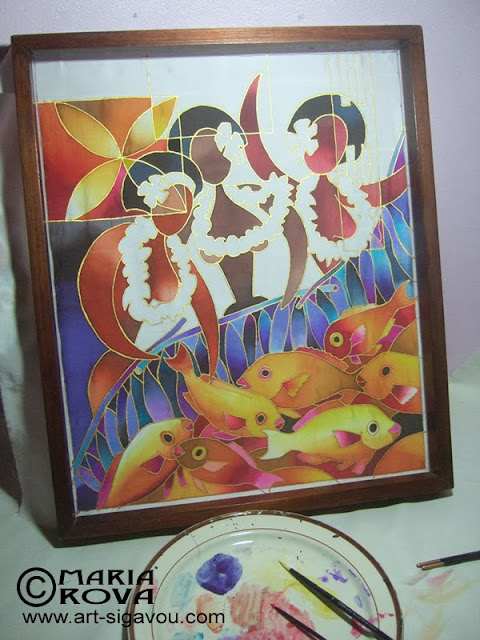 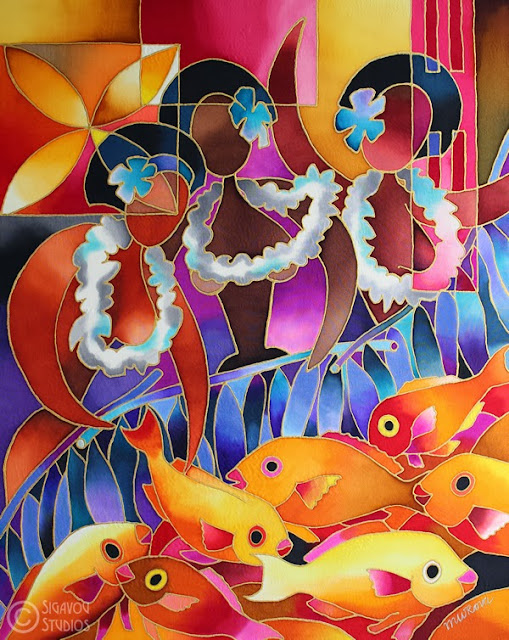 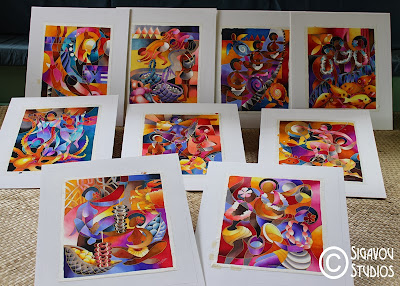 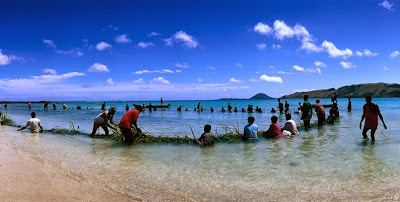 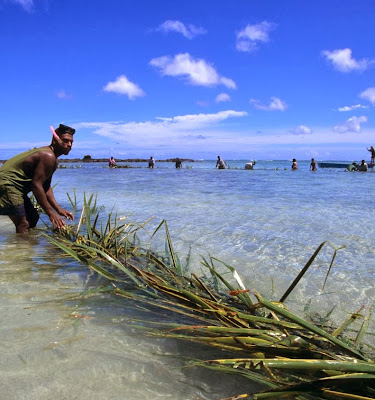 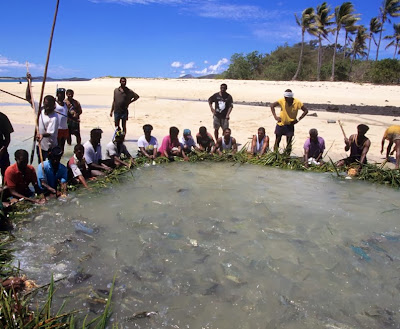 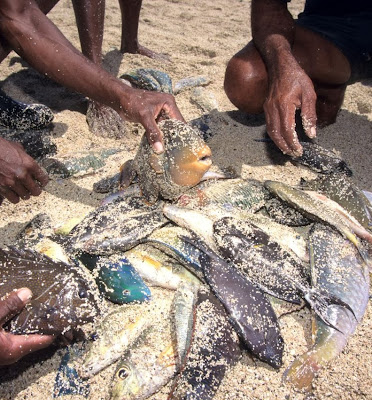 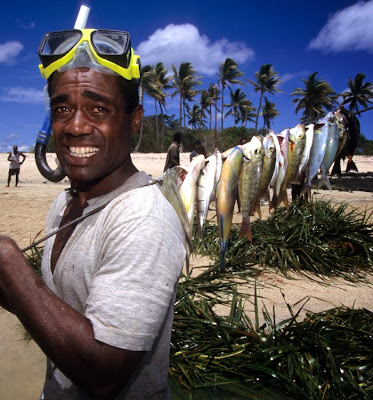 As this year’s cyclone season draws to a close, Sigavou Studios is celebrating with a special, one-off offer on a set of original silk paintings entitled "Journey of the Vaka I, II, & III".

If you’d like to make these three vibrant works of art a part of your life, please let us know…  (Offer ends April 1st! )  They are supplied unframed, with each painting weighing less than 800 grams – making for safe and easy shipping anywhere in the world!

For more details, and a copy of the story that goes with "Journey of the Vaka", please e-mail me at romarova@connect.com.fj.  I'm excited to learn where my double-hulled canoes may be sailing to! 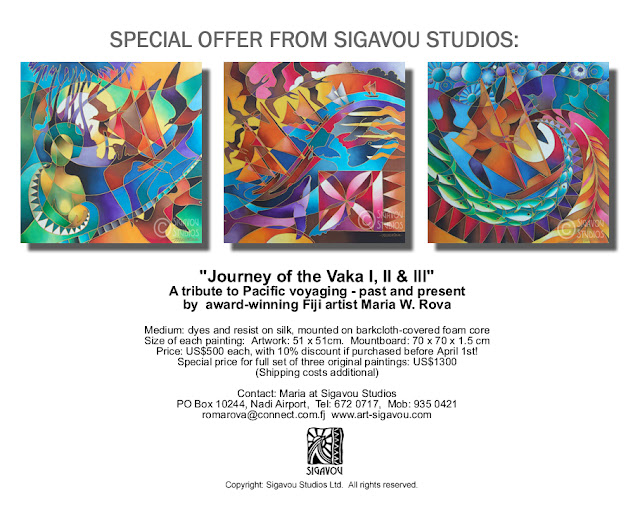 
AFTERNOON OF DAY FOUR: Yay! It's finally time to start to paint! Can't wait to see how my design will look in colour! I have a general idea of what it's going to be like, but I work intuitively, adding and blending colours as I go along, and I always end up being surprised at what evolves! 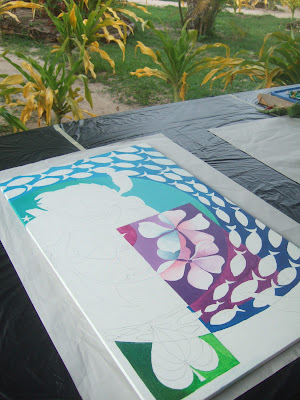 DAY FIVE:  Drinking yaqona (also known as kava - a drink made from the crushed roots of the Piper Methysticum plant) is an integral part of Fijian culture.  This 'muddy water', served in a coconut shell from a communal wooden 'tanoa' bowl, is our national drink, used in solemn ceremonies of welcome, burial, and the sealing of various alliances.  Kava-drinking has now evolved into a social past-time, with many of Fiji's multicultural population now unwinding around a tanoa after a long hot day at work...
In deference to this aspect of Fijian identity, a heart-shaped yaqona leaf is added to my painting! 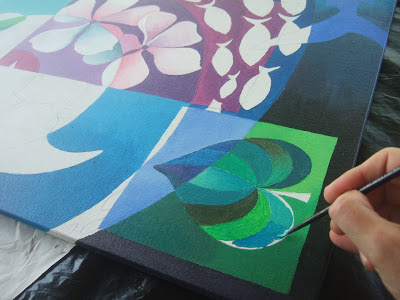 The wonderful thing about painting here, just a few meters away from the beach, is being able to wade into the water and go snorkeling whenever I need a break or some new inspiration!
The children have made friends with the kitchen staff who generously donate surplus bread for their fish-feeding escapades. We swim out to the edge of the coral, where schools of silvery green chromis, zebra and parrot fish swarm in around us... incredibly beautiful!
They get a mention in my painting as well - with a bit of poetic license thrown in as I can't resist a flash of bright red to offset the blues! 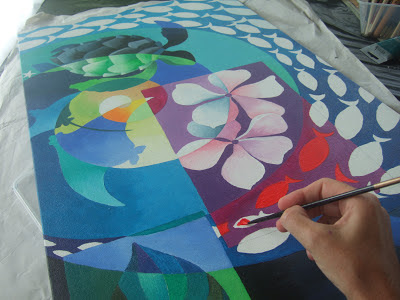 DAY SIX at Blue Lagoon Beach Resort:  We have to head back to the mainland today (sigh!) - but there's still time to hop onto a small boat, and head out to a reef a little to the south of this island. Donning flippers and masks, we make the ungainly plunge into the turquoise water - and enter a world of mesmerizing grace and beauty! This reef has lots of soft coral, and patches of anemones, inhabited by various versions of Nemo! But the highlight for me is watching a long black and white striped sea snake (dadakulaci) - by far the biggest I've ever seen, weaving it's way through the coral in a slow-motion underwater dance, seemingly oblivious of the onlookers hovering a few feet above!
Posted by Maria Rova at 16:35 No comments:


(Excerpts from a project journal started in mid Jan 2013)
WHAT WOULD YOU PAINT?
Here's the challenge I was up against this week: create a work of art for the wall of a restaurant in a little resort on the edge of this remote sandy beach, with an underwater reef world just a few feet below the surface of these azure Pacific waters... 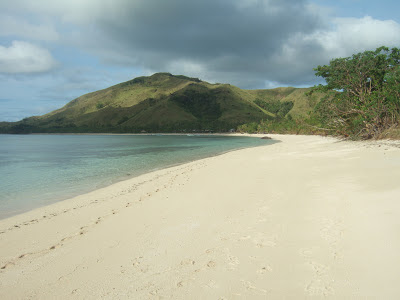 DAY ONE:
We have arrived at Nacula Island - to a warm welcome by the staff who have gathered on the beach to serenade us as we jump off the boat. The 4 hour trip from Port Denarau to the northern part of the Yasawa island chain has been a feast for the eyes - spectacular scenery: the jagged peaks of the Yasawas, remnants of volcanoes erupting along tectonic plate collision lines in the distant past, rise up steeply out of turquoise waters - and a school of dolphins bursts through the waves at one point - triggering a collective WOW from the dozens of passengers crowded on to the open deck of the Yasawa Flyer. 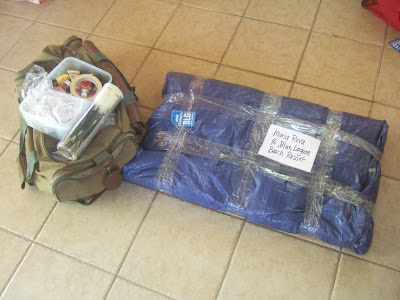 My two travel companions, Lomani and Sophia, rush to unpack their swim togs and snorkelling masks. My luggage is a little different: 5 canvas boards, sketching paper, acrylic paints, and brushes!

DAY TWO:  Gathering Ideas…  Up early for a morning walk along the beach. The high tide has erased all of yesterday's footprints so I'm the first to make new ones... Here are a few shots of the natural beauty around me that caught my attention 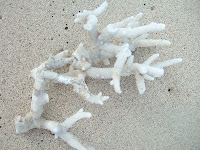 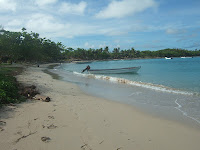 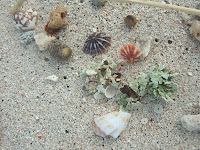 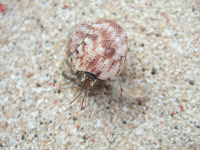 DAY TWO: The blank canvas moment: always a little daunting! (and doesn't that hammock right next to my new workplace look very inviting!!) 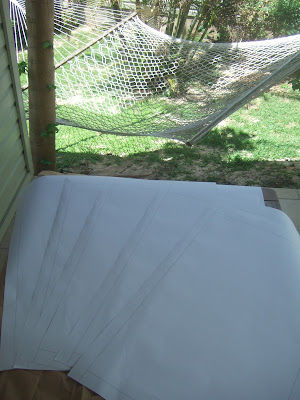 DAY THREE: A pair of White-Collared Kingfishers keeps swooping through the tree tops around our bure, the turquoise plumage on their backs glinting iridescent in the sunlight. They are amongst my favourite Fiji birds - so I can't resist adding one into my mural! 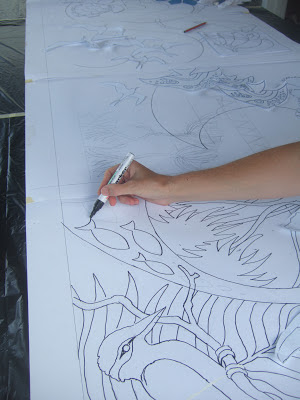 This is typical of the way my paintings evolve - lots of separate sketches which I cut out and move around until the pieces of the puzzle all fit together and I have my master plan! I then ink over the final lines before transferring the drawing to the board, silk, or barkcloth I will paint on...

AFTERNOON OF DAY THREE: On a roll now with preliminary sketches. My theme is the tropical reefs that are such a feature of life in the Yasawas - with references to traditional Fijian culture and island flora and fauna thrown in. The amazing and ever-changing hues of the lagoon just yards away from where I'm working will be the dominant colours for my five-part mural... 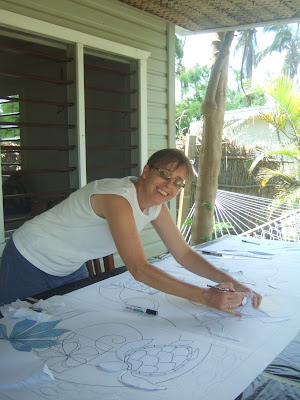 DAY FOUR of the Blue Lagoon Project: Have you ever tried to draw a STONE FISH? Turns out that the stone fish (kaseva) is one of the totem animals for the mataqali (indigenous clan) that owns the land on which Blue Lagoon Beach Resort is built. All tribal units in Fijian society have totem plants and animals that are a significant part of their identity. When creating art for a certain locality, I like to make reference to these, as a mark of respect to the traditional owners of the land.
In discussing this with the staff at Blue Lagoon, most of whom come from nearby Nacula Village, I learn that here, the kaseva and vudi (plantain or green banana) are of significance to the landowners, as are the vadra (screw pine) and vasua (clams). So my drawings, which are now complete, include all four totems... 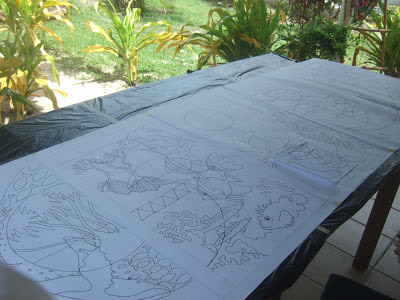 Further installments of my Blue Lagoon Project Journal to be posted shortly!